Join us at NJDTE on October 23rd from 6:00-9:00 PM for an adult only evening of Masquerade with passionate Latin Dance and Music. Proceeds benefit the New Jersey Dance Theatre Ensemble to purchase performance risers and theatrical wings. #dancethenightaway 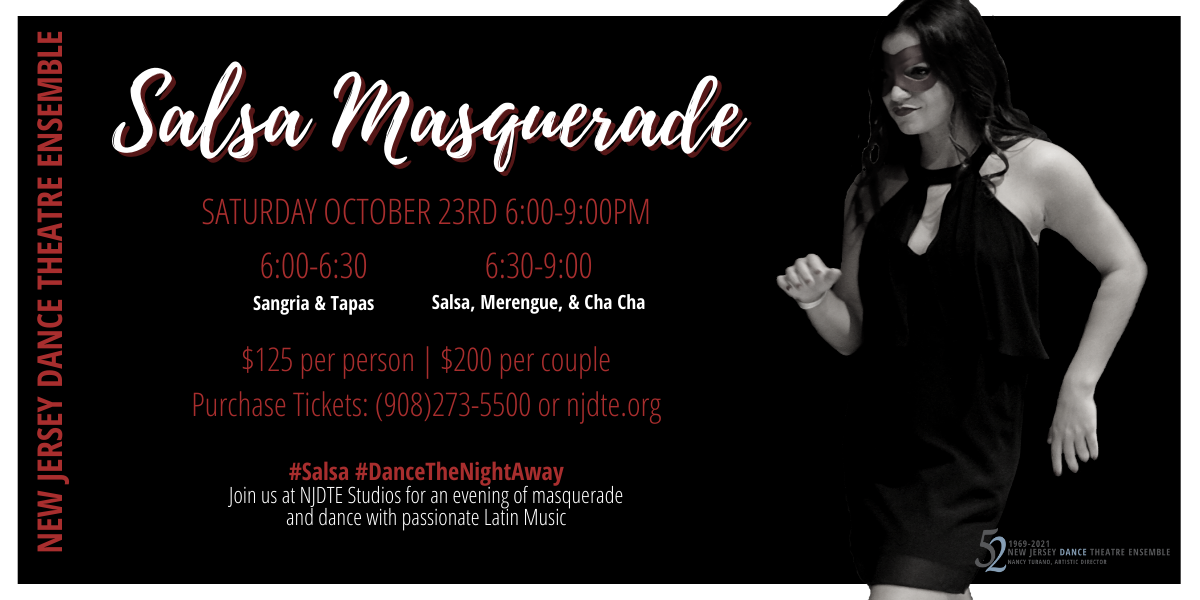 There are currently no tickets available for this event, but you can still make a donation.

Join us at NJDTE on October 23rd from 6:00-9:00 PM for an adult only evening of Masquerade and dance with passionate Latin music. Proceeds benefit the New Jersey Dance Theatre Ensemble to purchase performance risers and theatrical wings.

JESSICA BATTEN trained as a student with New Jersey Dance Theatre Ensemble under Nancy Turano, and graduated cum Laude from SUNY Purchase in 2005-- with a BFA in Dance. Ms. Batten has danced professionally with: NJDTE, Cedar Lake II, Connecticut Ballet, Bradley Shelver Contemporary Dance Theater, Ballet Hispanico of New York, Nimbus Dance Works, Aspen Santa Fe Ballet, and with The Metropolitan Opera Ballet; among many other companies and choreographers. Ms. Batten was invited to perform in Cali, Colombia in the Fifth Annual International Dance Festival 2011, representing the USA with Earl Mosely's Diversity of Dance, and has traveled the world performing and teaching. She has performed with the Kirov Ballet at The Metropolitan Opera House in NYC, and has been an invited Artist for the Cape Dance Festival. In 2008, she appeared on the AMICI Television Show in Rome, Italy, dancing as a Guest Profesionista on the full series. Additionally she has appeared in film and several more TV credits, such as Law & Order: Criminal Intent. Ms. Batten has always enjoyed teaching, coaching, and choreographing in addition to her performance career. She has conducted many master workshops and residencies throughout New England and abroad. Ms. Batten was the Ballet Mistress & Rehearsal Director for NJ Dance Theatre Ensemble for several years, where she staged multiple Ballets for the pre-professional company. When she is in NYC, she serves as part time Rehearsal Director for the professional contemporary dance company, Nimbus Dance, along with being on faculty at The Joffrey Ballet School every summer. Previously she was a Guest Instructor for five years, in the World Dance Summer Program, at Amherst College in Massachusetts. Today Ms. Batten resides in Putney, Vermont where she is the Director of Dance at The Putney School, a progressive boarding high school in southern Vermont. Currently in her sixth year as Director of Dance, she has greatly expanded the Putney Dance Program and has been responsible for managing the program as a whole; teaching all technique classes, as well as choreographing and commissioning new works & guest artists, for their high school dancers. She lives on campus and is also a dorm parent, advisor & mentor to students. Jessica loves having the opportunity to work with all creative & passionate young dancers and witness their tenacity & artistry shine through on stage.

RODNEY HAMILTON A native of St. Louis began his dance training at the age of ten and trained with Carr Lane V.P.A., COCA, Alexandra School of Ballet, and Katherine Dunham. At the age of 14, Mr. Hamilton began his professional career joining the adult chorus at the Muny of St. Louis where he performed for seven years. After graduating with a BFA in Dance from the Juilliard School, he joined Ballet Hispánico of New York where he was a principal dancer and assistant rehearsal director for 10 years. During this time, he performed works by José Limon, Paul Taylor, Hans van Manen, Robert Battle, Ohad Naharin, David Parsons, William Whitener, Ann Reinking, Ramón Oller, Sergio Trujillo, Trinette Singleton, Agnes DeMille, Talley Beatty, Annabelle Lopez Ochoa, Vicente Nebrada, and numerous other well-known choreographers. Mr. Hamilton was part of the national touring cast of Hello Dolly with Carol Channing and worked with the Broadway cast of Tarzan. In 2012, Mr. Hamilton became the resident choreographer for the Saint Pete City Theater where he choreographed Hello Dolly, Footloose, and Memphis. In 2019 Mr. Hamilton in the associate choreographer for Evita at the City Center of New York’s Encore Series. Mr. Hamilton holds an MFA in Dance from NYU Tisch School of the Arts. He has taught ballet, modern, and Dunham technique all over the world. Mr. Hamilton is currently an adjunct professor of dance at Marymount Manhattan College and has returned home to Ballet Hispanico as rehearsal director for BHdos, faculty member and Professional Studies Program Director at the School of Dance.

You can support us by making a donation!